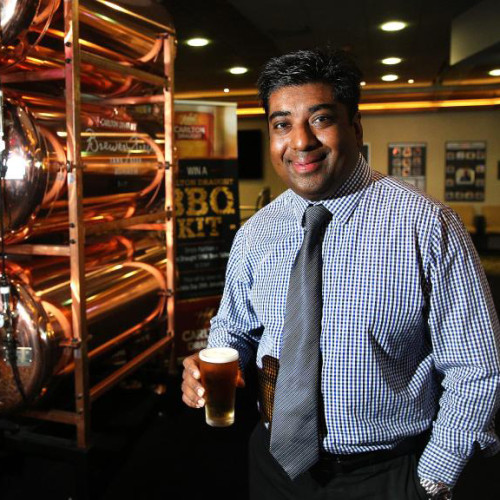 CARLTON Draught’s unpasteurized beer is proving so popular at Penrith RSL Club that, on some nights, patrons have bled the newfangled copper tanks dry.

“It (Carlton Draught) was our sixth seller (as a keg beer) — it’s now at No. 3,” Dave Want, the club’s duty manager, told Penrith Press three weeks into the change.

The beer is piped at 3C into insulated tanks near the club’s main entry bar from a refrigerated truck that rolls up to the club every three weeks. Keg beer lasts about four months, Mr Want said.

“We’re the only club in western Sydney to have these tanks,” Mr Chand said of the three 500-litre tanks, which took a week to install piping beer to four bars in the club.

He said customers are coming out of area to see the tanks and taste the beer which, according to Mr Want, has a “sharper flavour and much better aftertaste” than its keg equivalent.

But Mr Chand has never shied away from making changes, and these changes appear to have paid off.

Under his stewardship the carpark was overhauled, adding over 400 extra spaces.

The club then replaced the show room with a buffet, seating around 650 people.

“The TAB turnover is up 30-40 per cent since it opened (upstairs) thanks to its visibility,” Mr Chand said. It is now to your left, at the top of the escalator as you enter the club.

“I always knew this club had a lot of potential,” the chief executive said.

“This year we intend to revamp the function rooms.”

Asked about his wish list, Mr Chand said it includes more restaurants for the club and an auditorium.

■ Unpasteurised beer is considered to be the purist’s beer, because it is not heated to 70 degrees during the brewing process

■ It is decanted straight from the tank to the venue

■ The perfect Carlton Draught should have a 10-15mm tight, thick, creamy head, says the brewer