Penrith RSL Club would like to acknowledge the hard work, dedication and contribution our life members have made towards the Club.  We are proud to have so many members, now Life Members who have made such an impact on who we are, what we have and what we represent in the community. for this, we are always thankful and grateful. 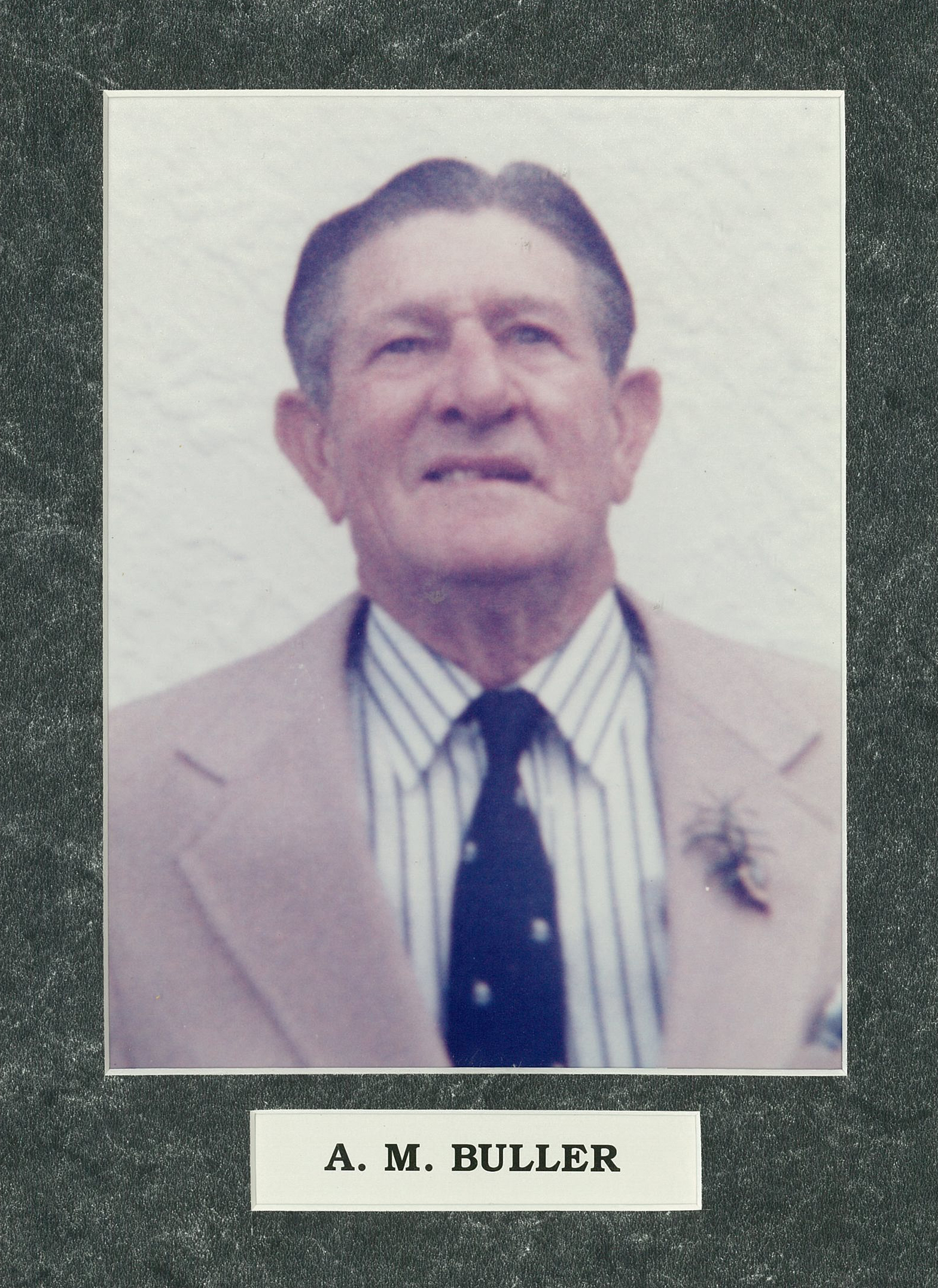 Albert Matthew Buller or Bert as he was known, signed up in the Army on 24th June 1940. He remained in the Army until 23rd January 1946. He was voted in as President of the sub Branch in 1956, he then served as President again from 1958 to 1963. Bert was also President of the Penrith RSL sub Branch Club from 1956 to 1962. In 1954 when Bert was the RSL Club President, there was a need for further expansion and re-build to cover activities such as meetings, dances and a bar area, so the two houses the RSL owned were connected together. Bert was also very keen to set up sporting functions for all age groups, including senior and junior cricket, swimming, bowls, darts etc. This facet of the Club remains a legacy today with the sponsorship of a large number of intra club sports. 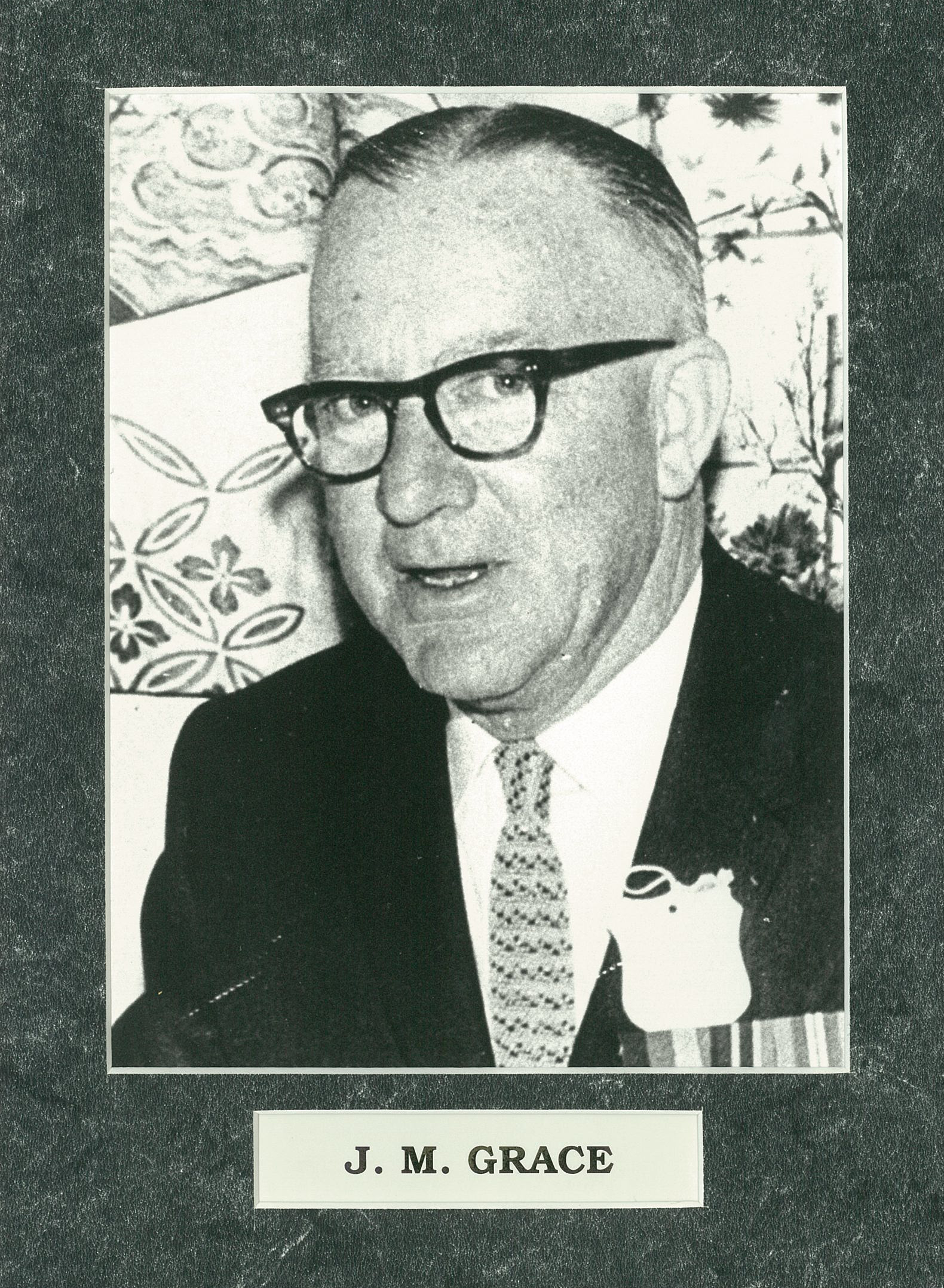 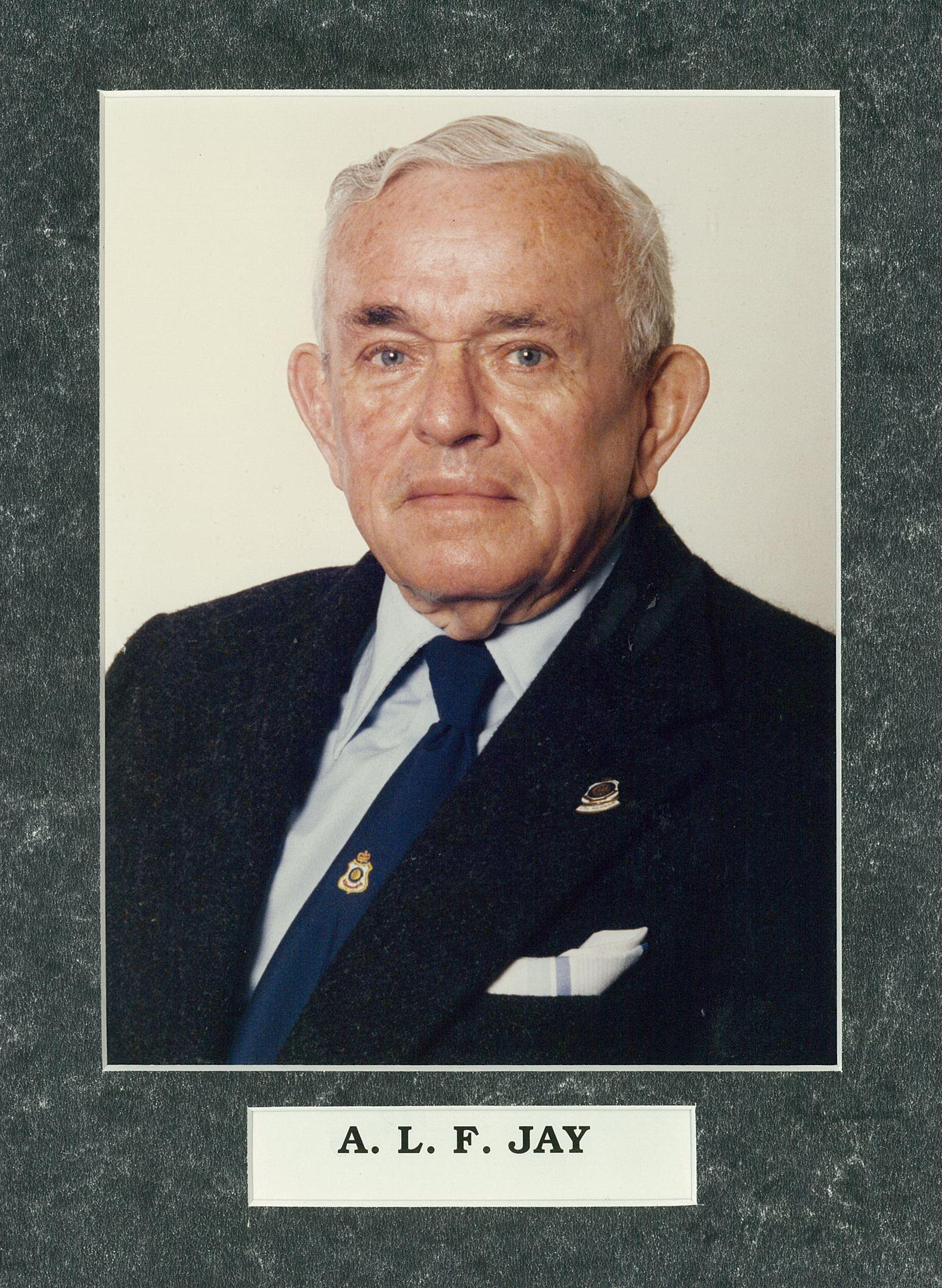 Alfred Lyle Francis Jay known as Alf, served in WWII from October 1939 to October 1945. He joined the RSL as soon as he returned and was sub-Branch Secretary in 1947. RSL Board Member. 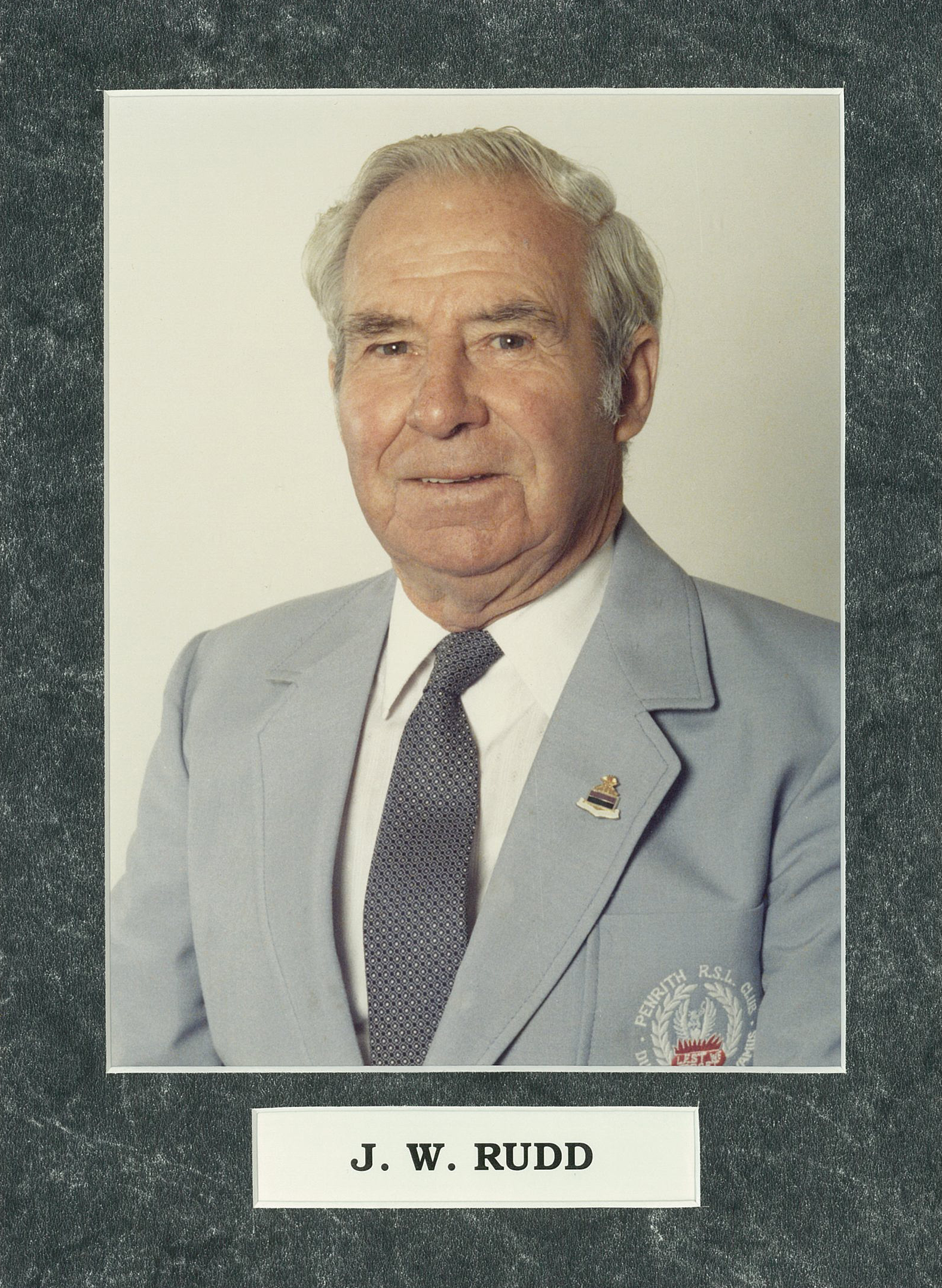 John William Rudd known as Jack, also an ex WWII veteran who served from April 1943 to March 1946. Jack was a keen supporter of the cricket club and spent several years as captain. He also was the hospital visitation officer for some years. 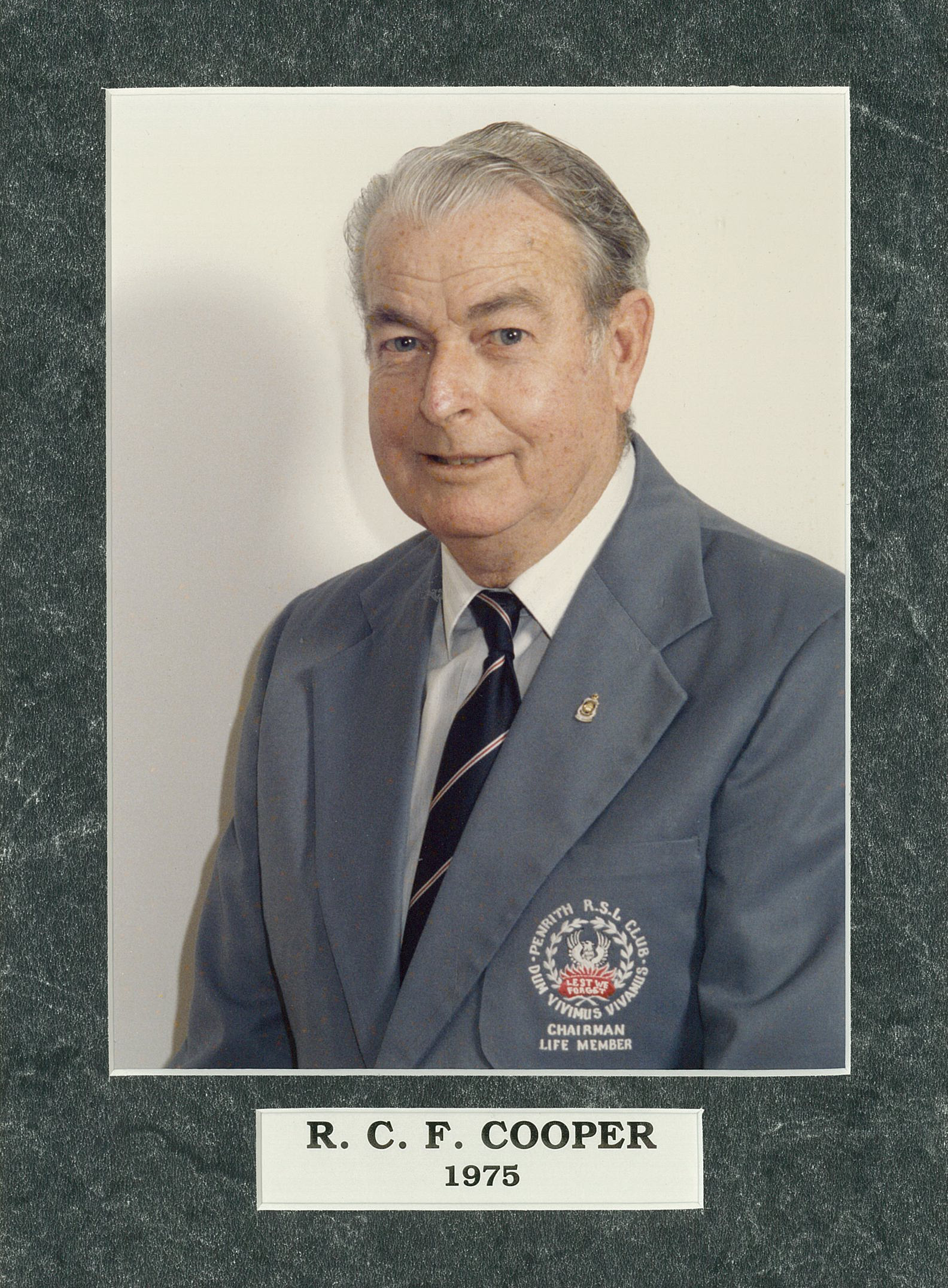 Robert Cecil Francis Cooper known as Bob, he joined the RAAF during WWII in March 1943 and served until 1970. He was sub-Branch President from 1970 to 1989 and RSL Club President from 1971 to 1989. Longest serving member in both positions. 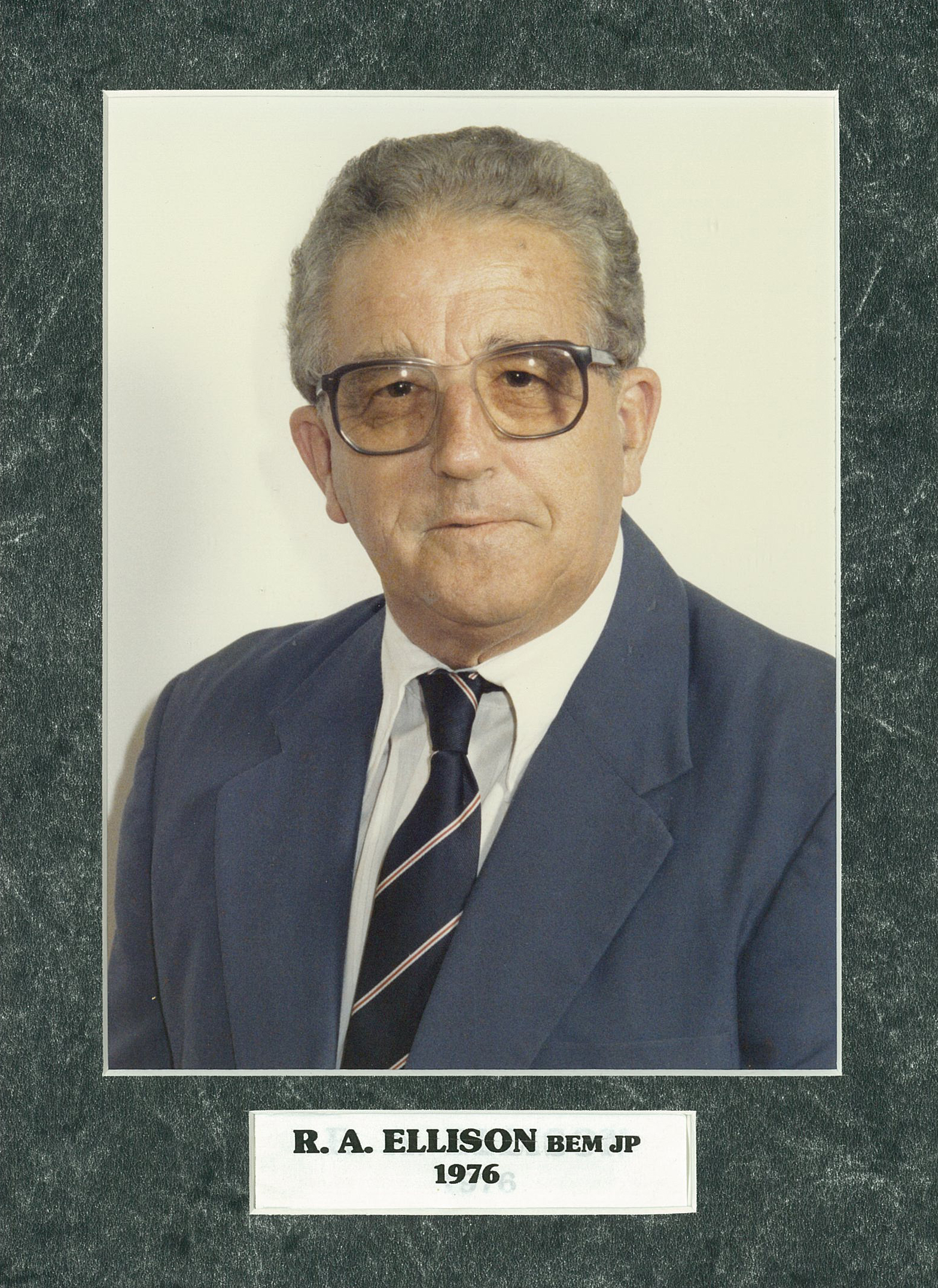 Reginald Allen Ellison known as Alan served in WWII from July 1943 to April 1946. Alan was the sub-Branch Secretary during 1953/54 and again from 1969 to 1989. He was Deputy Chairman of the RSL Club board for a while. Awarded a BEM for commitment to the ex-service community. 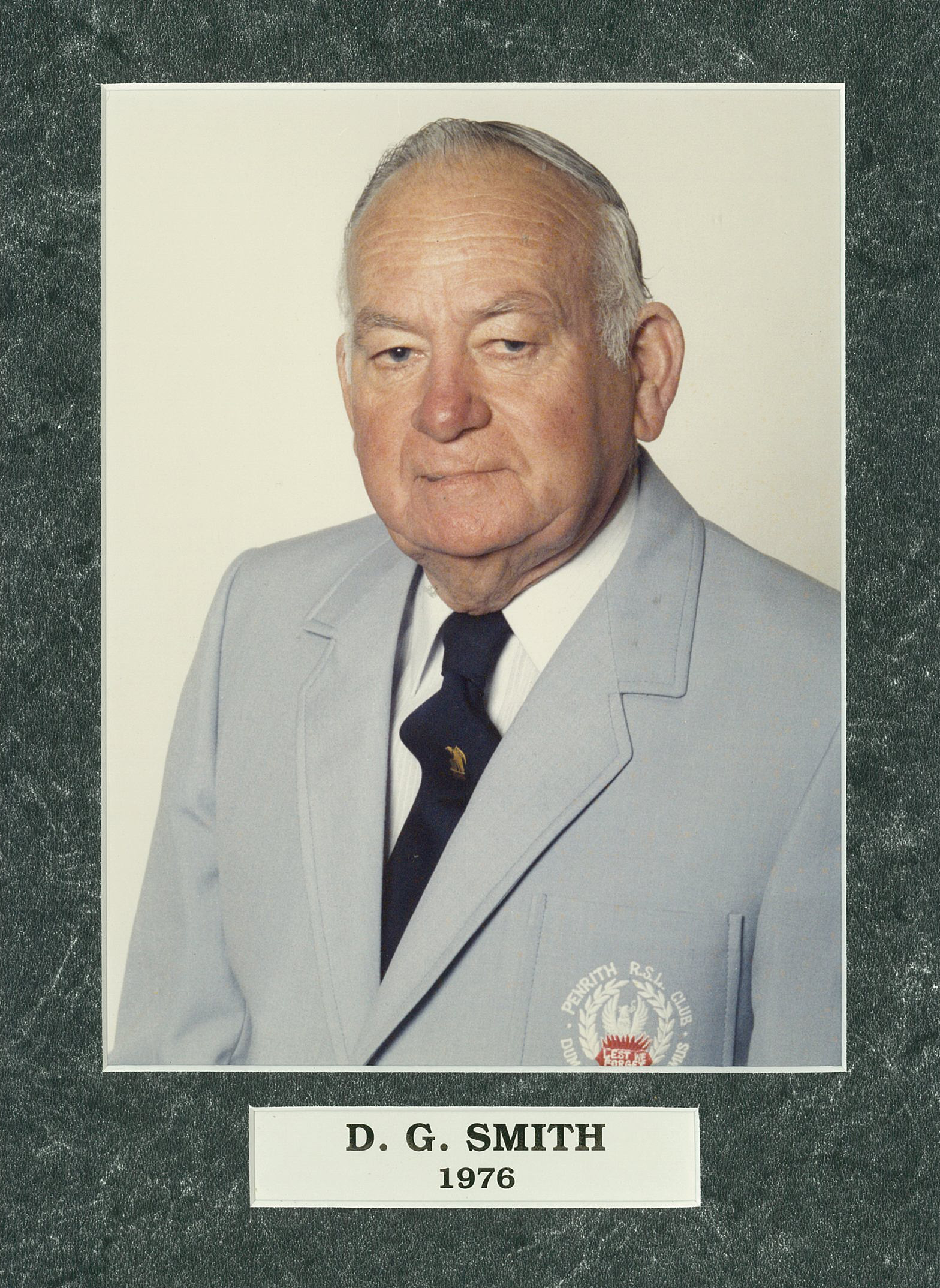 Darcy Gordon Smith, Associate Life Member. He was involved for a long time with the RSL cricket club spending some time as Treasurer and also involved with local rugby league. 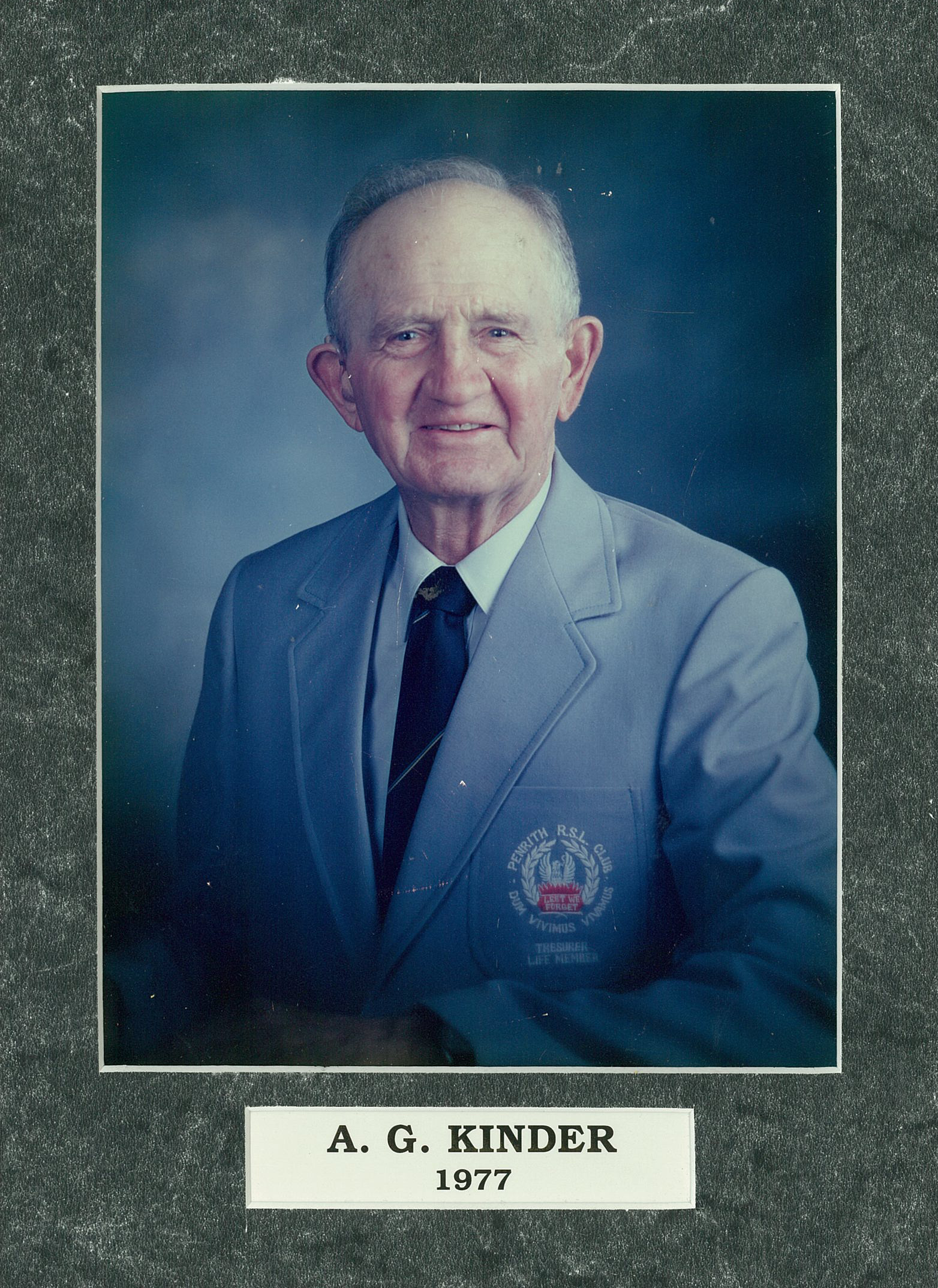 Arthur Gordon Kinder known as Jim, served in WWII from April 1940 to July 1945. He was sub-Branch Secretary from 1951 to 1961 and sub-Branch President from 1966 to 1969. Jim was also RSL Club Treasurer from 1985 to 1993. RSL Board member, and was Deputy Chairman of the RSL Club board for a while. Awarded an MBE for services to the ex-service community. 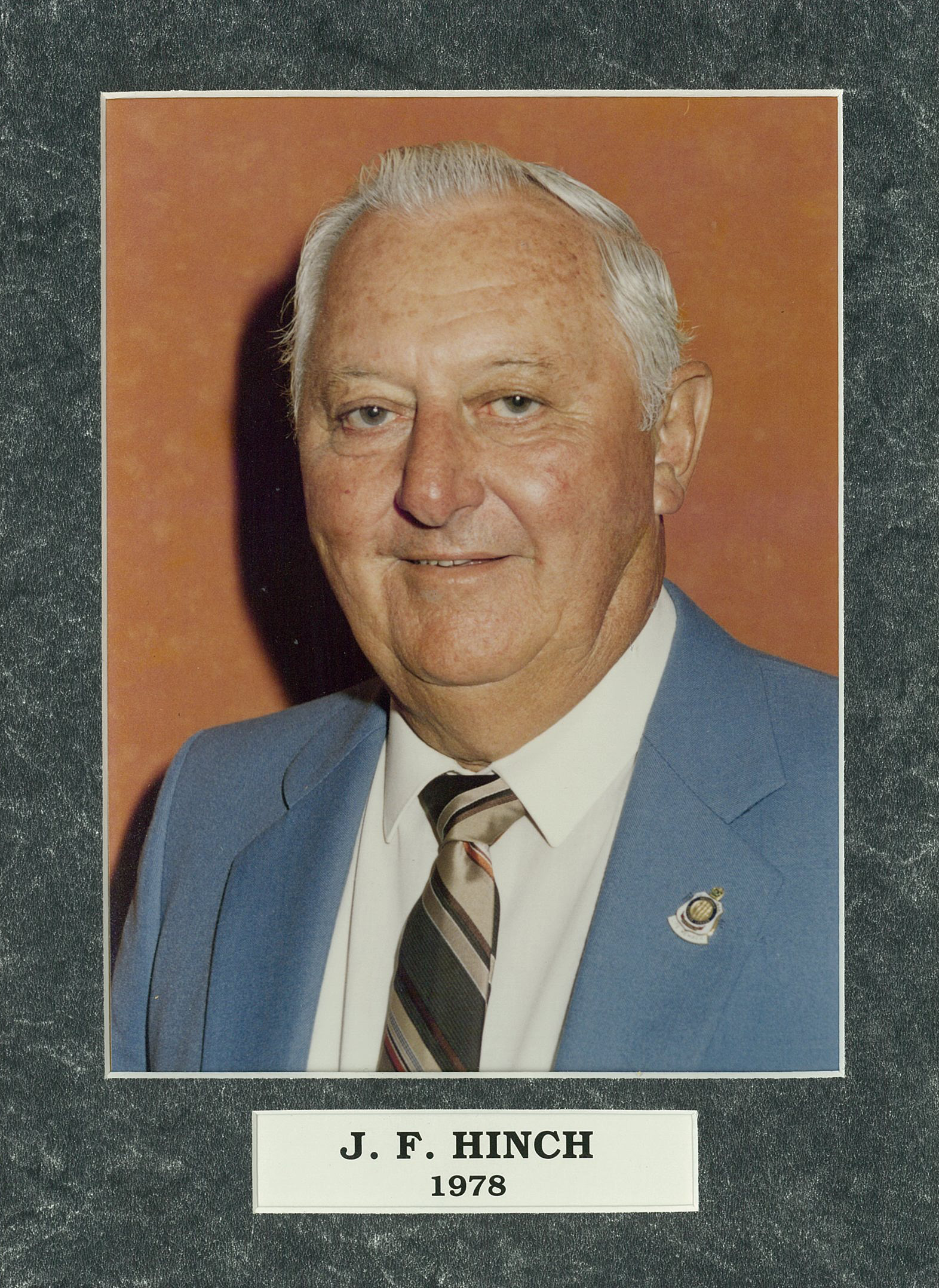 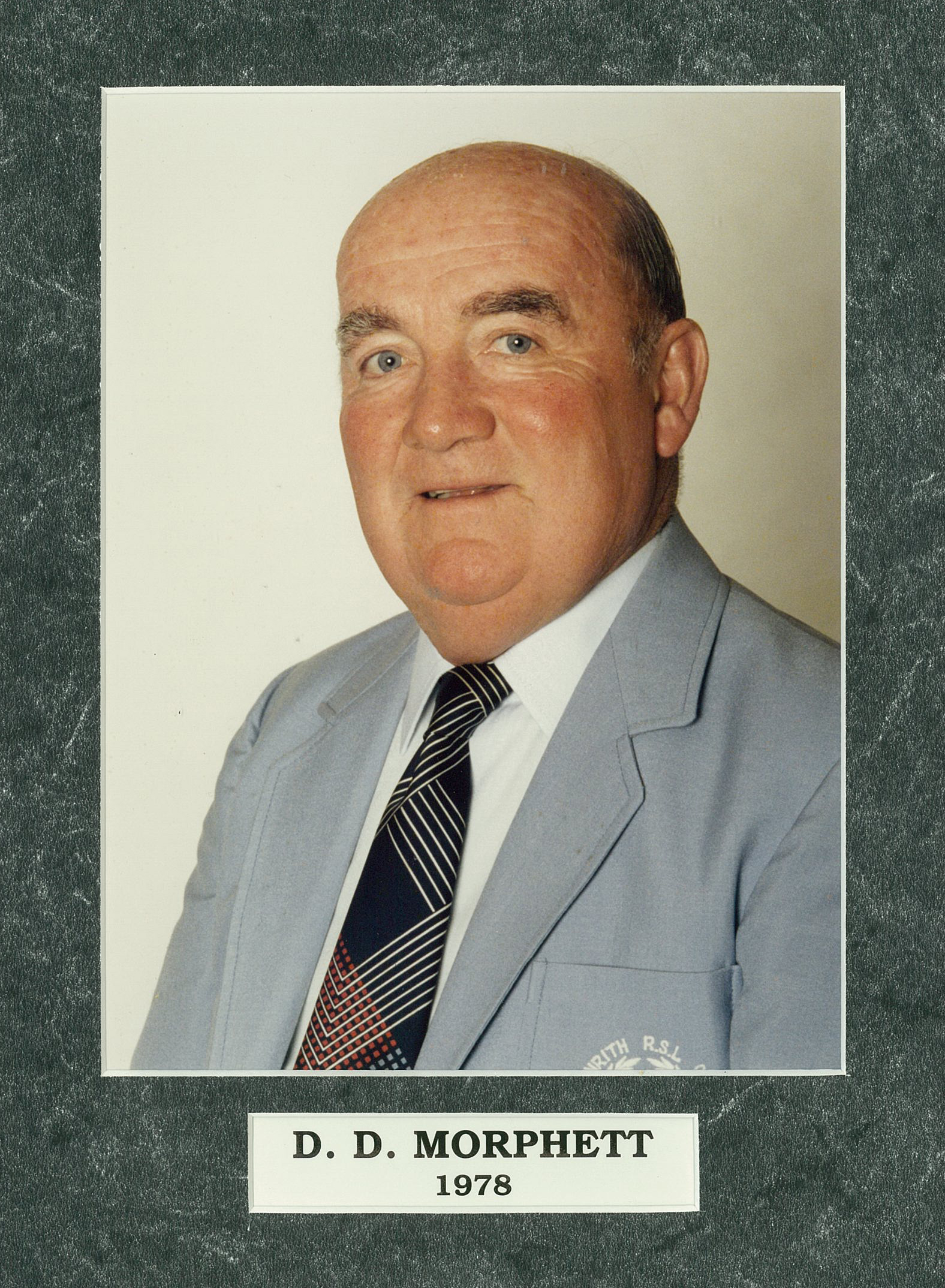 Donald David Morphett served in WWII from March 1944 to April 1946. He was one of five brothers who served. He was the sub-Branch Treasurer in 1951 and Secretary in 1955. Donald was also the RSL Club Secretary from 1954 to 1956 and was the first one to hold the liquor trading licence. 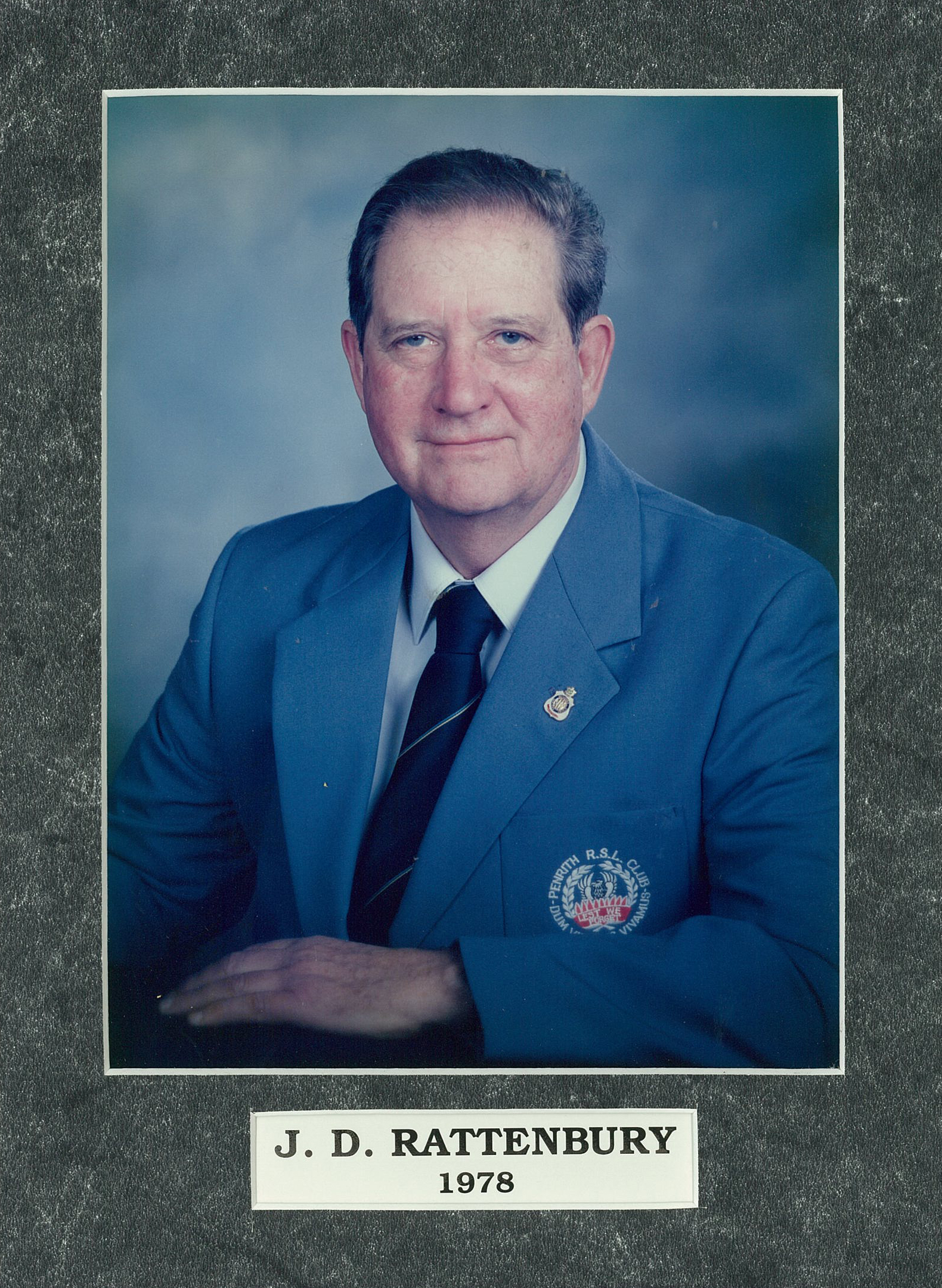 John Dudley Rattenbury known as Jack, served in WWII from March 1942 to June 1946. He was an active member in RSL sport, mainly with the senior cricket where he was a committee member for many years. Jack was on the RSL Club board for a number of years. 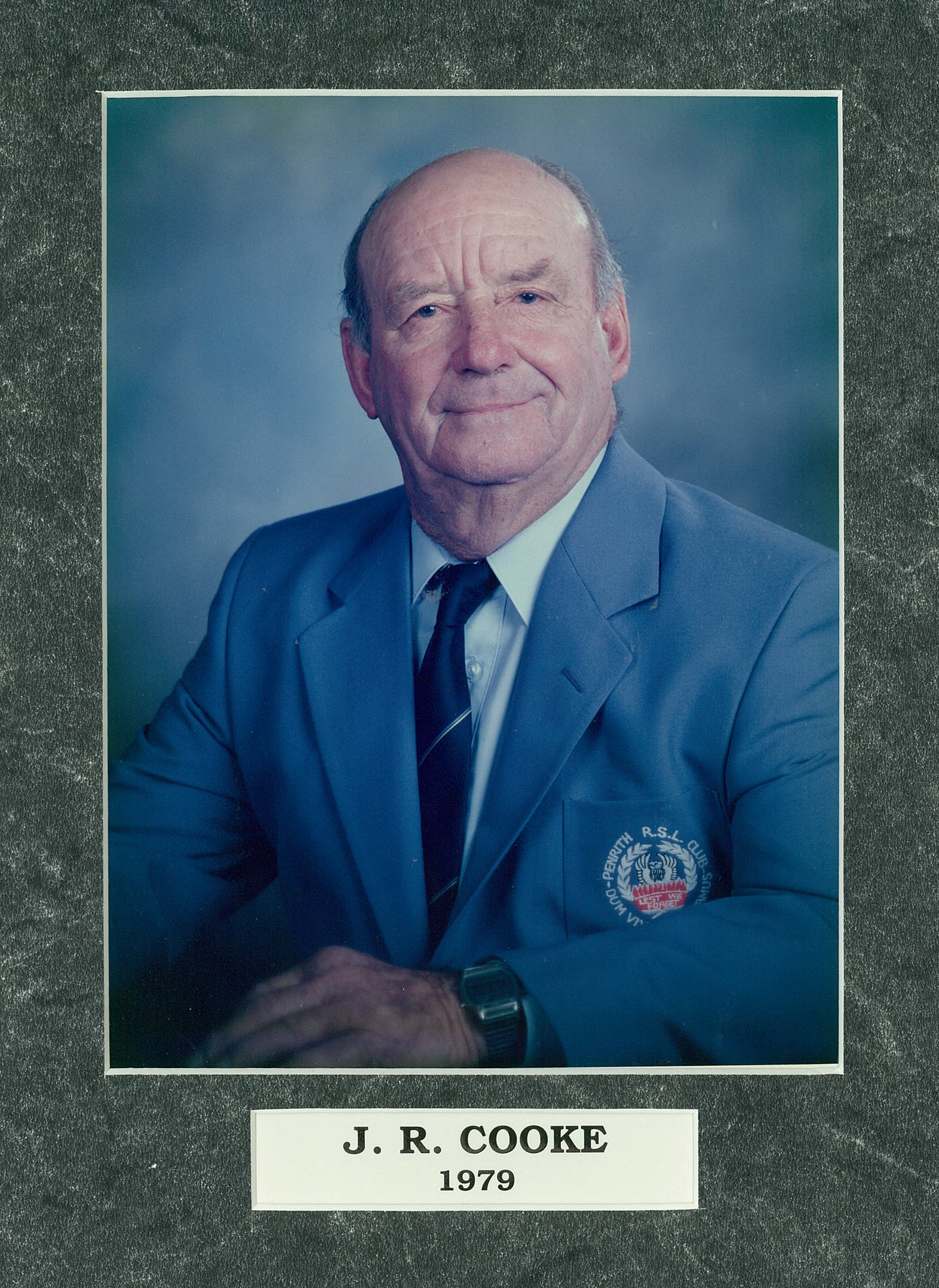 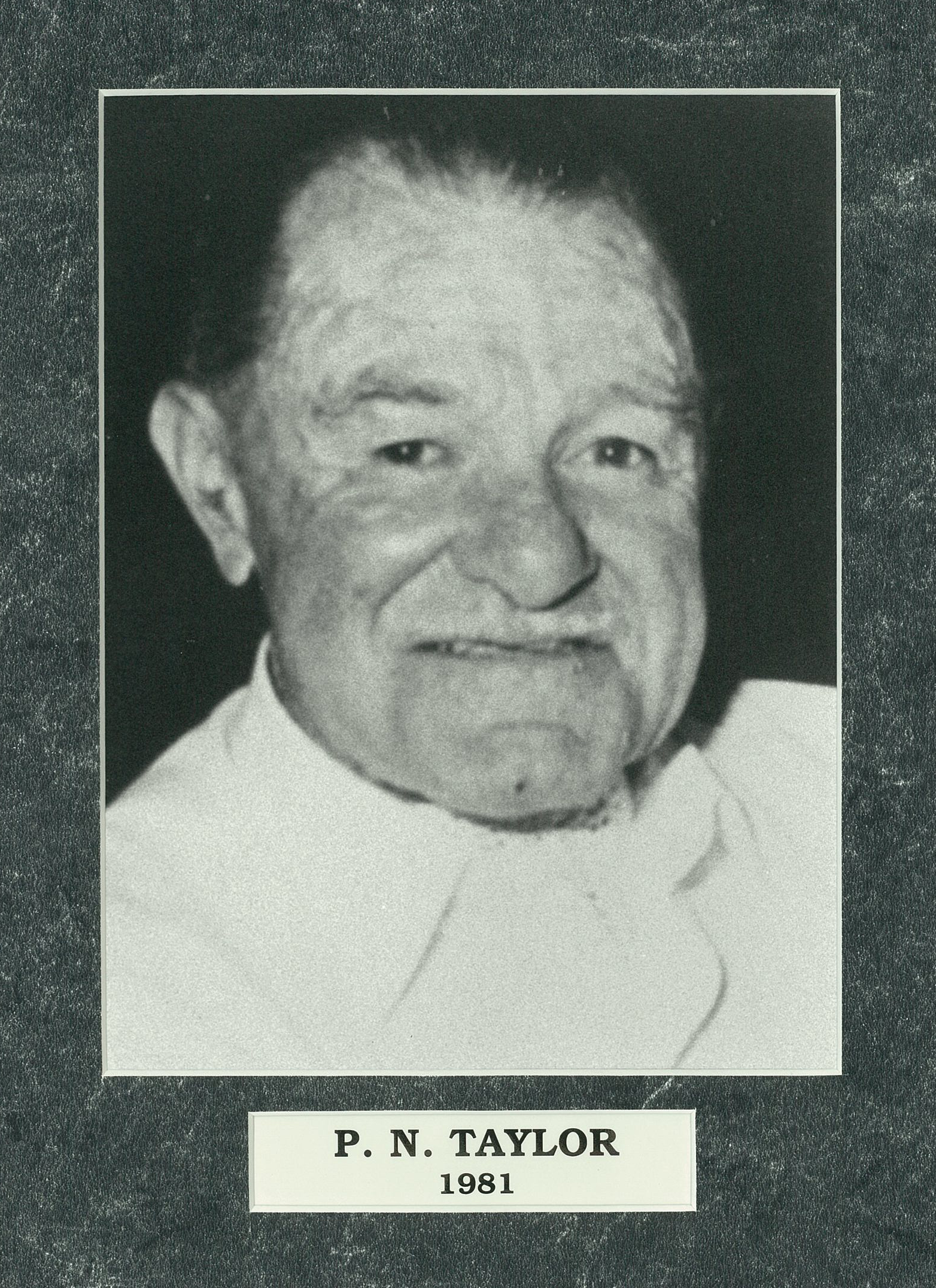 Percy Norman Taylor known as Norm, served in WWII from April 1940 to November 1945. Norm was the sub-Branch librarian for many years. 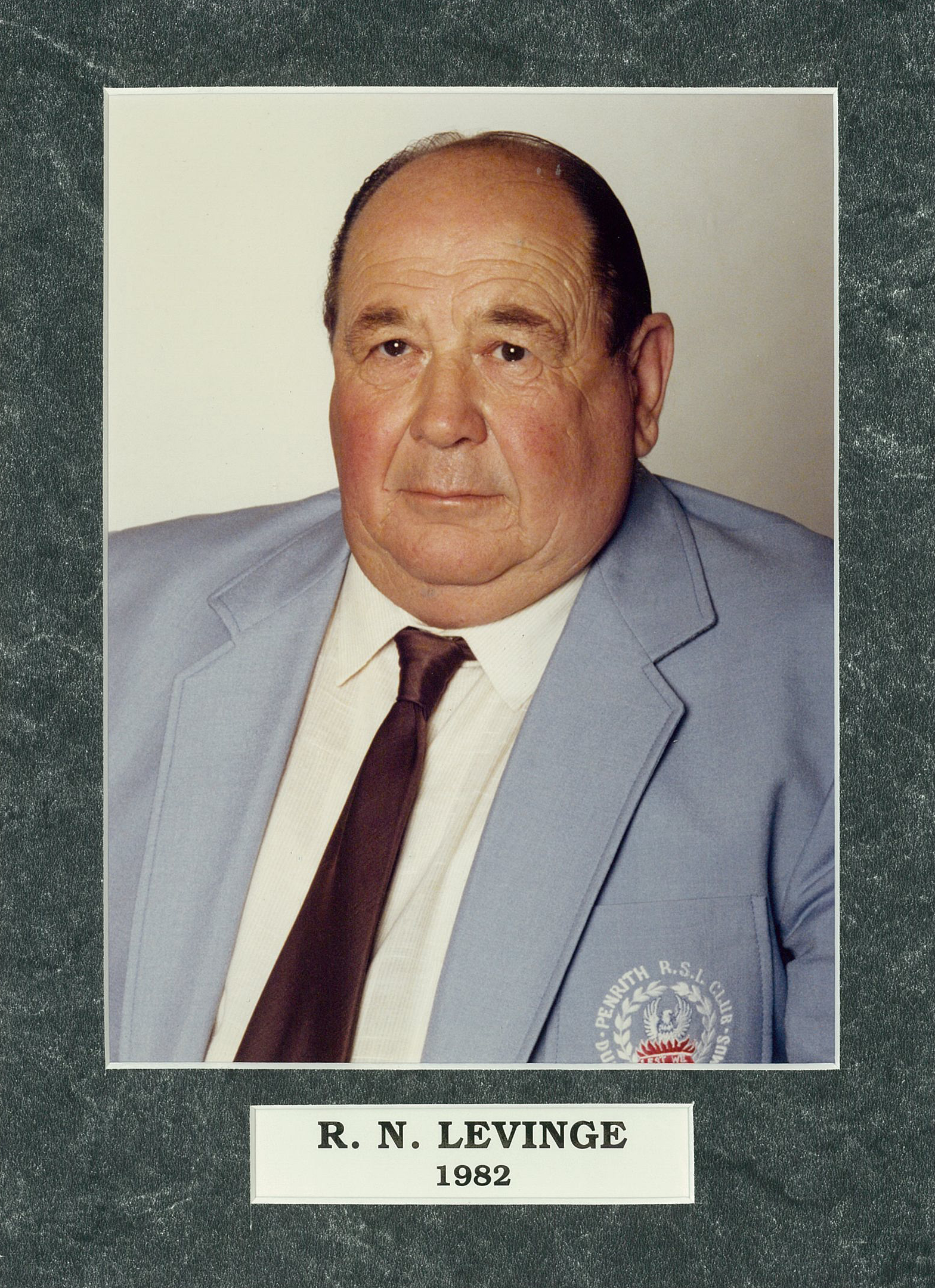 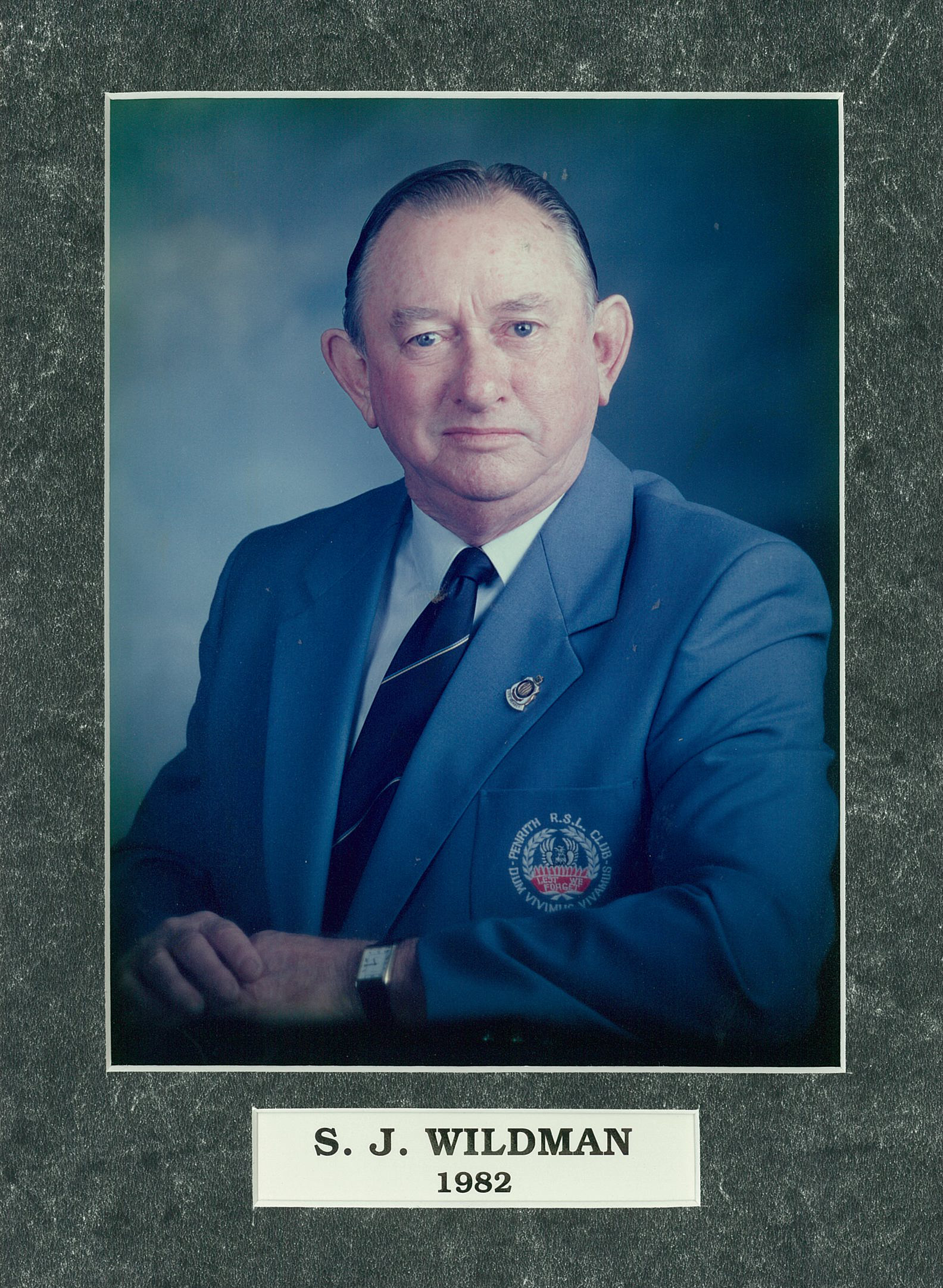 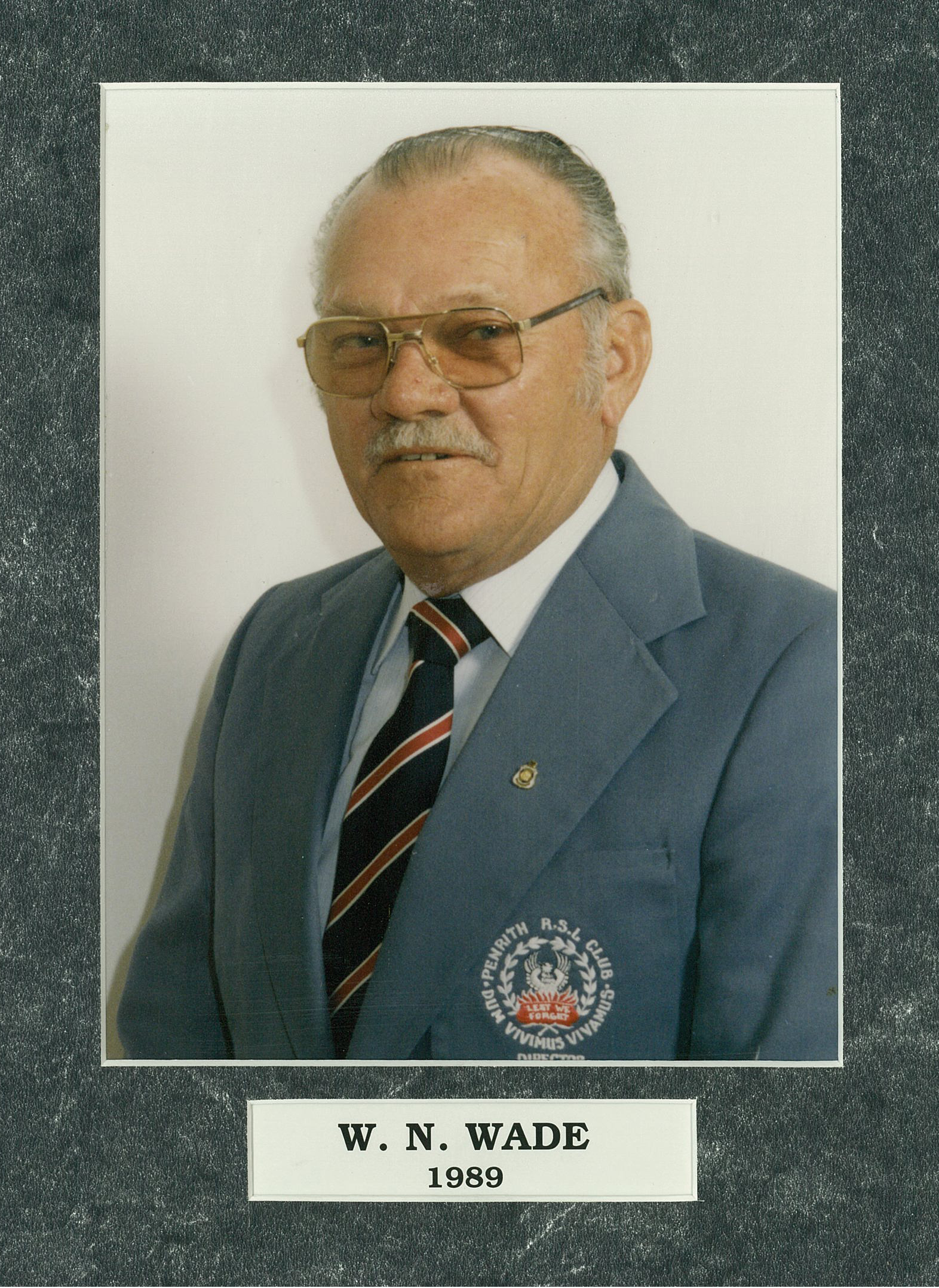 William Norman Wade served in WWII from May 1945 to January 1947. He was an active member of the sub-Branch and RSL Club. 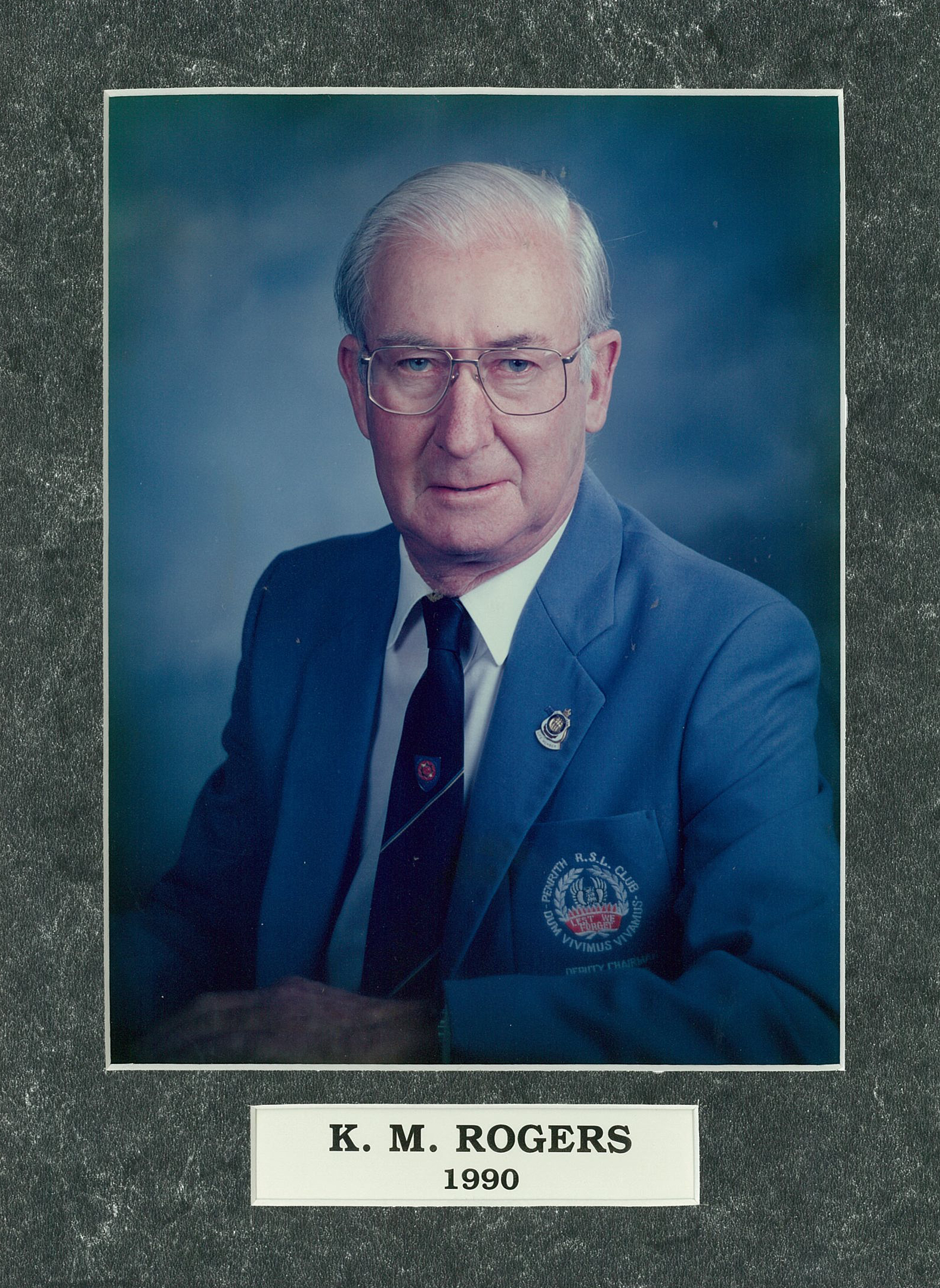 Keith Maxwell Rogers known as Buck, was a WWII and Vietnam Veteran. Buck was the sub-Branch Treasurer from 1980 to 1989. 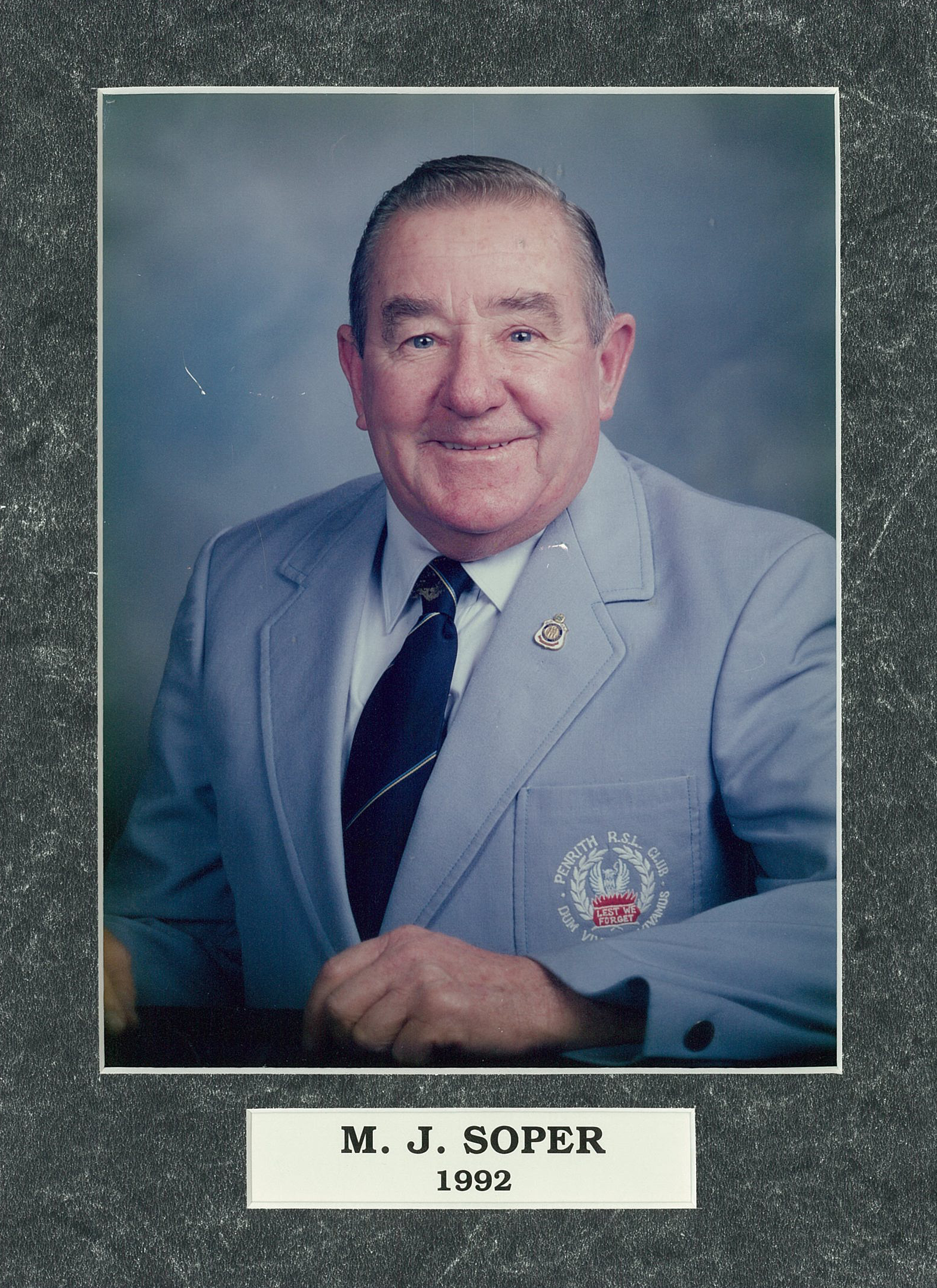 Michael John Soper served with the CMF as an Air Dispatcher. He spent nearly 30 years on the RSL Club board, many years as Deputy Chairman. Mick ran the Wednesday night movies for most of this time. 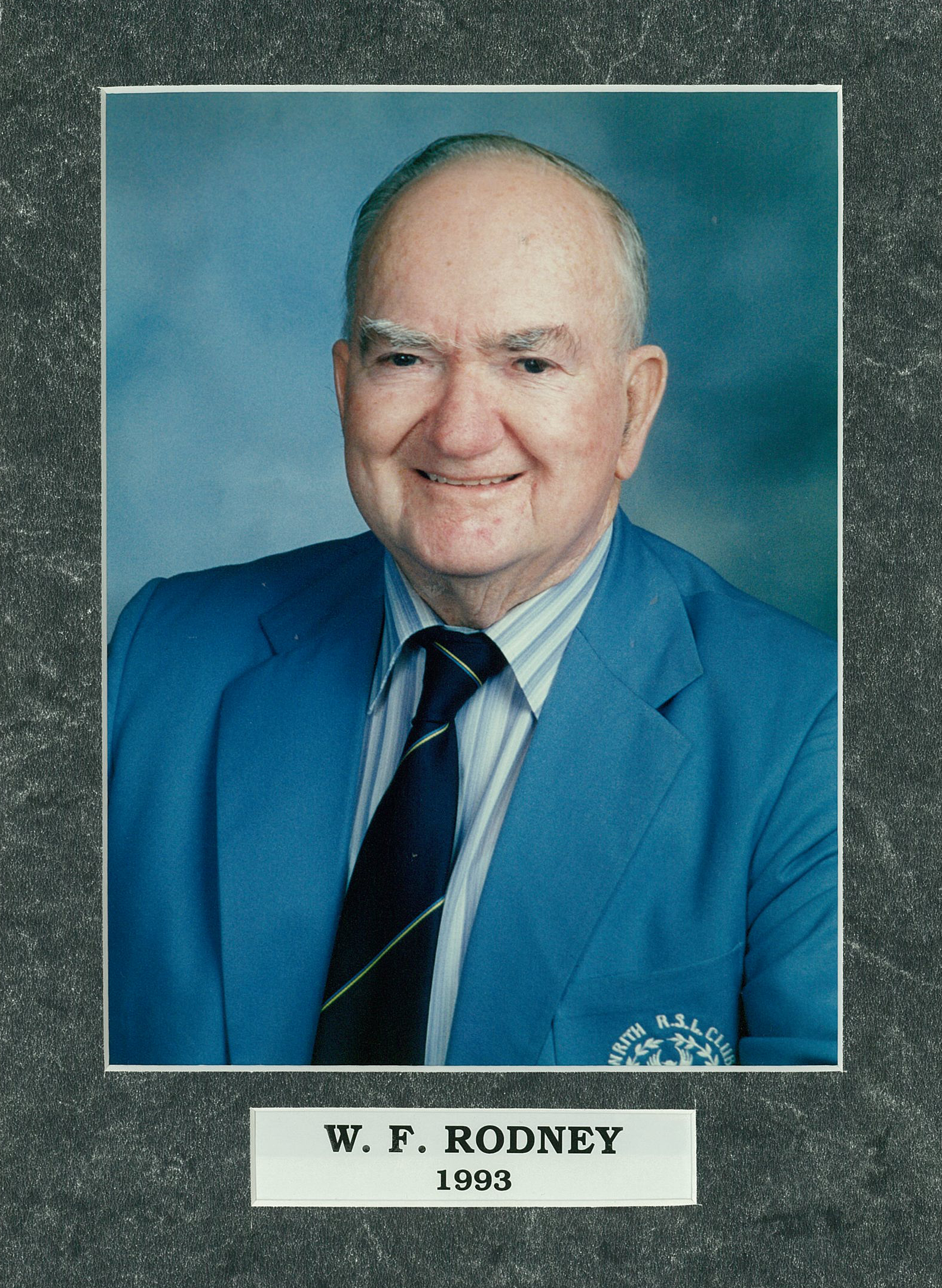 William Frederick Rodney served in Korea from September 1950 to January 1951. Bill was the sub-Branch Welfare Officer for many years and the Hospital visitation Officer. 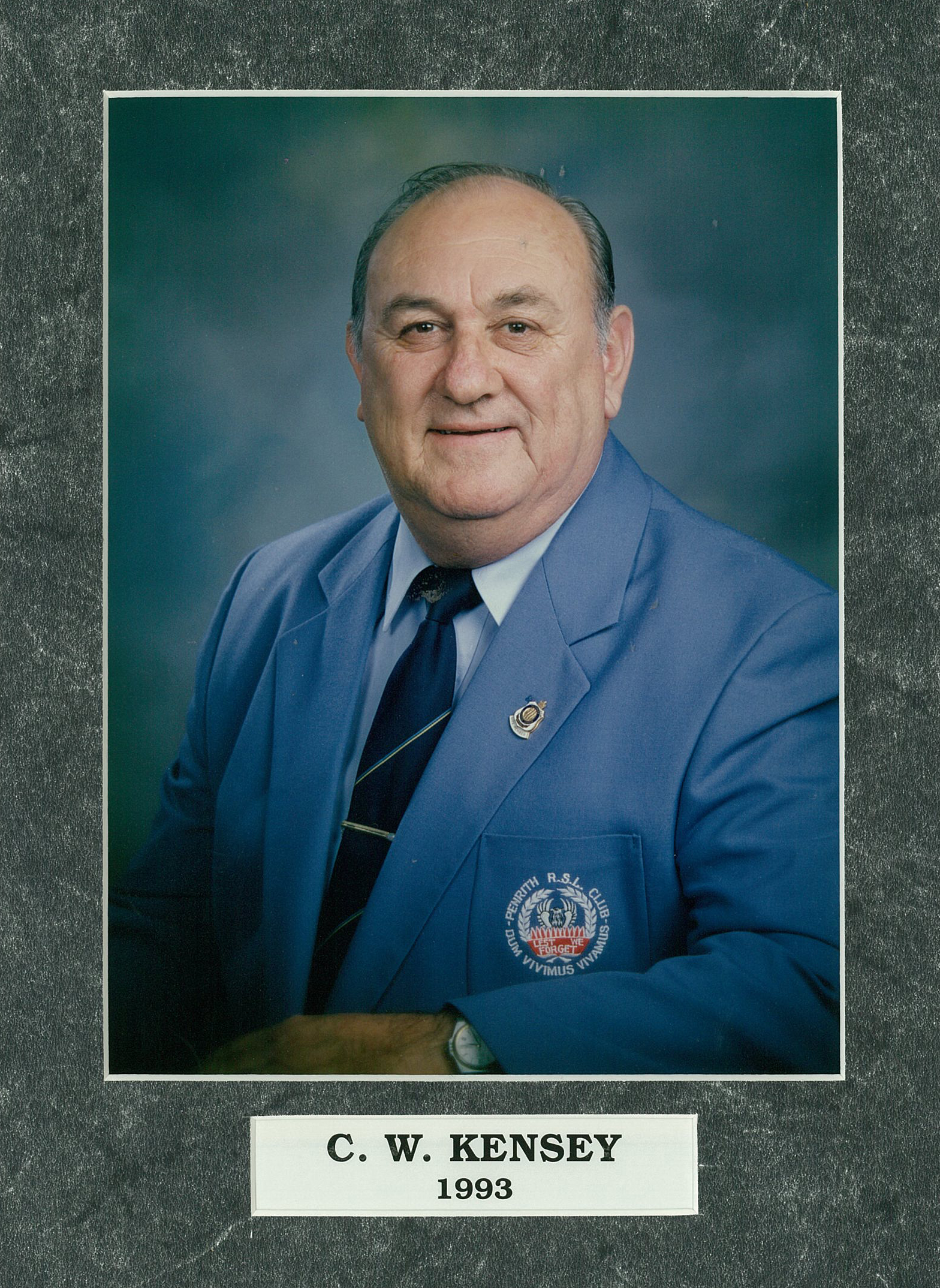 Cecil William Kensey served in Malaya and Vietnam. Ces was the sub-Branch Secretary from 1990 to 1992. He was on the RSL Club board for a number of years and was Chairman in 1996. 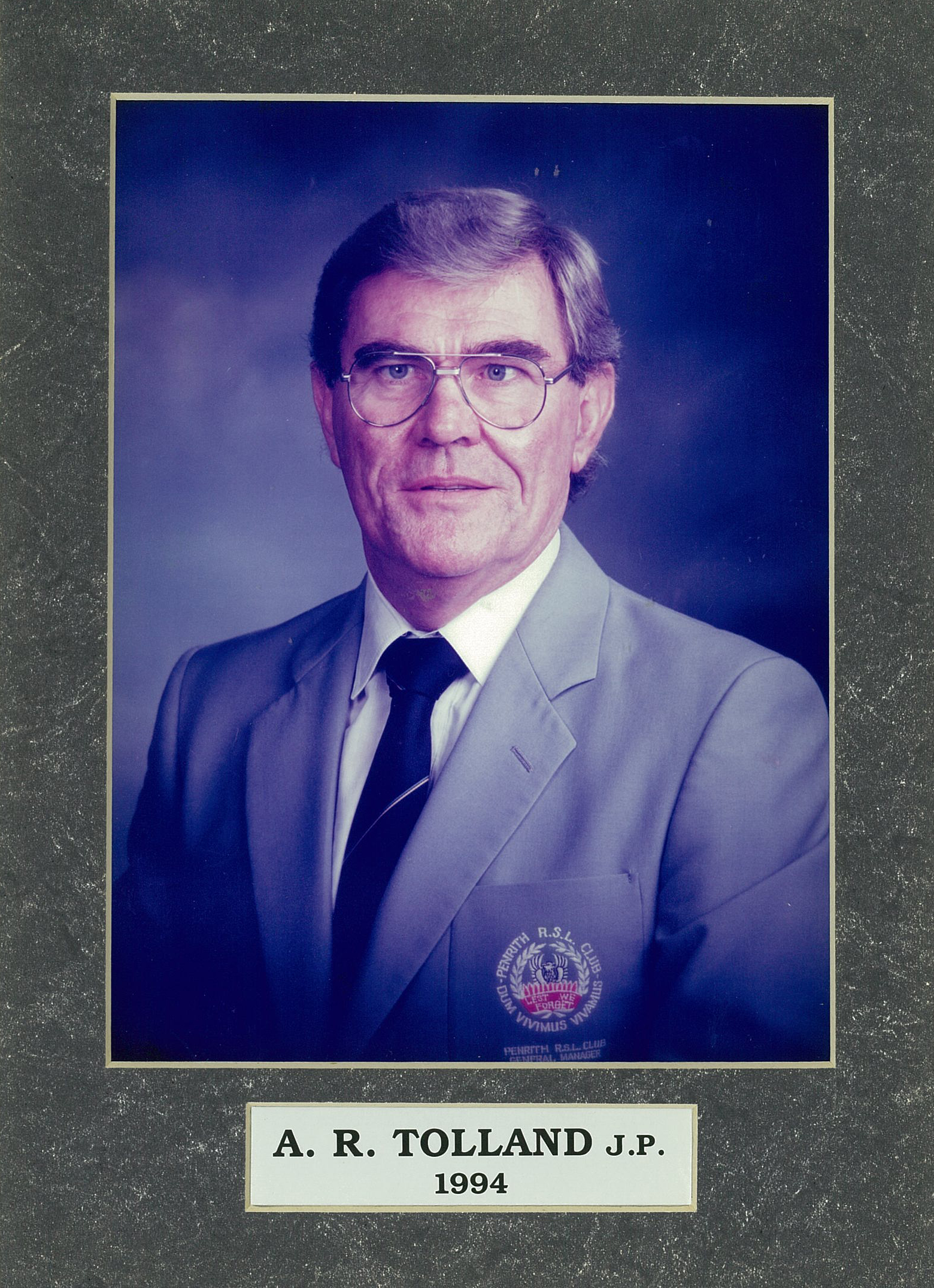 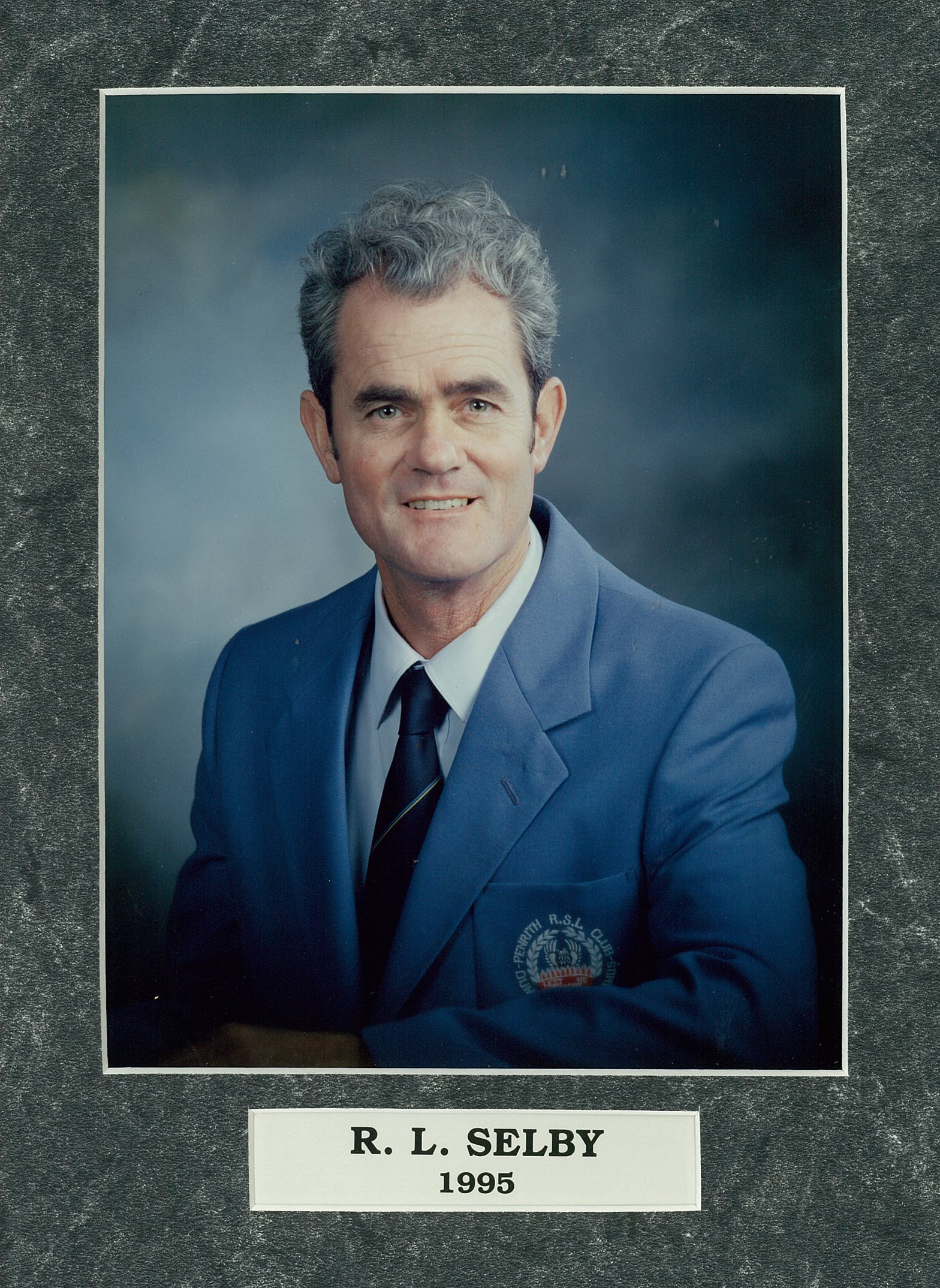 Robert Selby known as Bob, Associate Life Member, was on the RSL Club board for many years, he held the portfolio of Penrith Chamber of Business liaison for a long time. He was a local businessman himself in furniture removals. 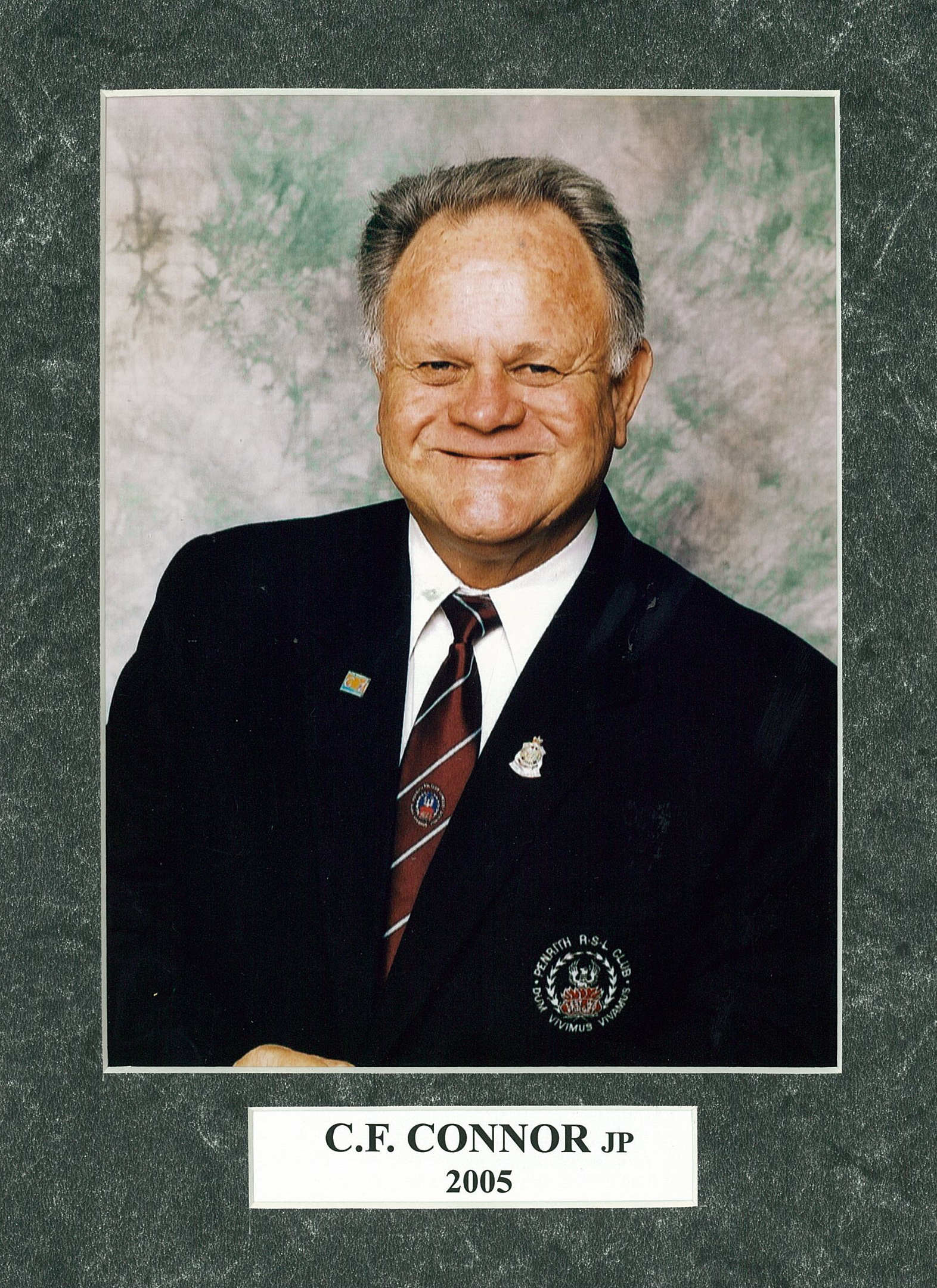 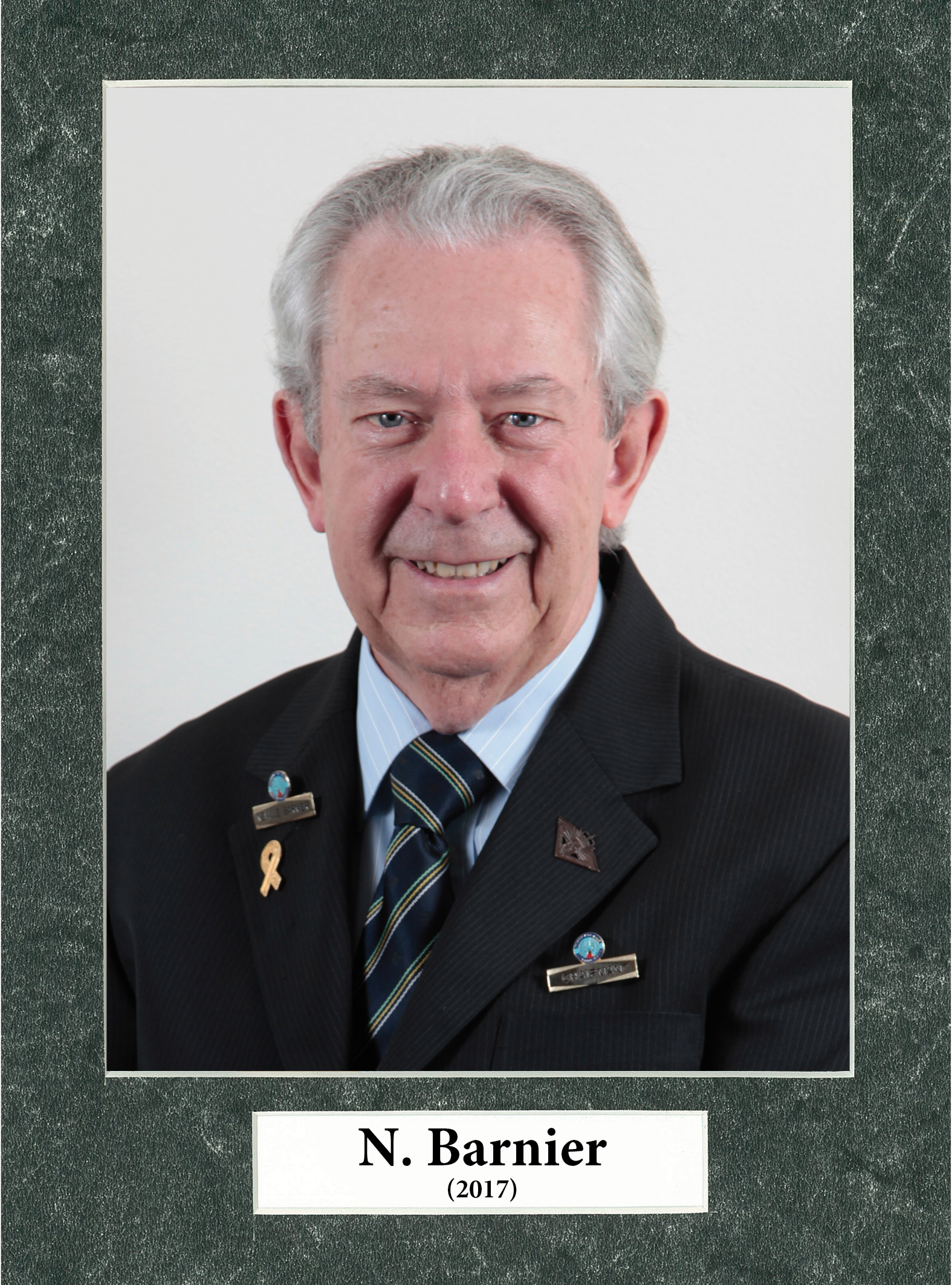 Neville was a Director of the Club for 12 years and Chairman from 2009 to 2016. With a background in Financial Services, Neville brought a commercial approach to the management of the Club at a time when it was being financially challenged by the introduction of significant increases in Government taxes and the implementation of Non-Smoking regulations. Neville drove necessary changes to the operation of the Club to survive these threats. He was instrumental in establishing the War Memorial Display in a prominent position in the Club to clearly identify the Club’s connection with the ex-service community.

Neville is a past President of the City of Penrith RSL sub-Branch and Blue Mountains Vietnam Veterans Association. Neville was also a Director of The Australian Foundation for Disability for 34 years, the last 3 as Chairman. He introduced the Homes for Heroes program into Western Sydney and served as a Director of the Veterans Benevolent Fund. He was awarded the Penrith City Council Citizen of the Year in 2004 and a Rotary International Paul Harris Fellowship for service to the community. On Australia Day 2018 Neville was awarded a Medal of the Order of Australia (OAM) for services to people with a disability and to the community of Penrith. 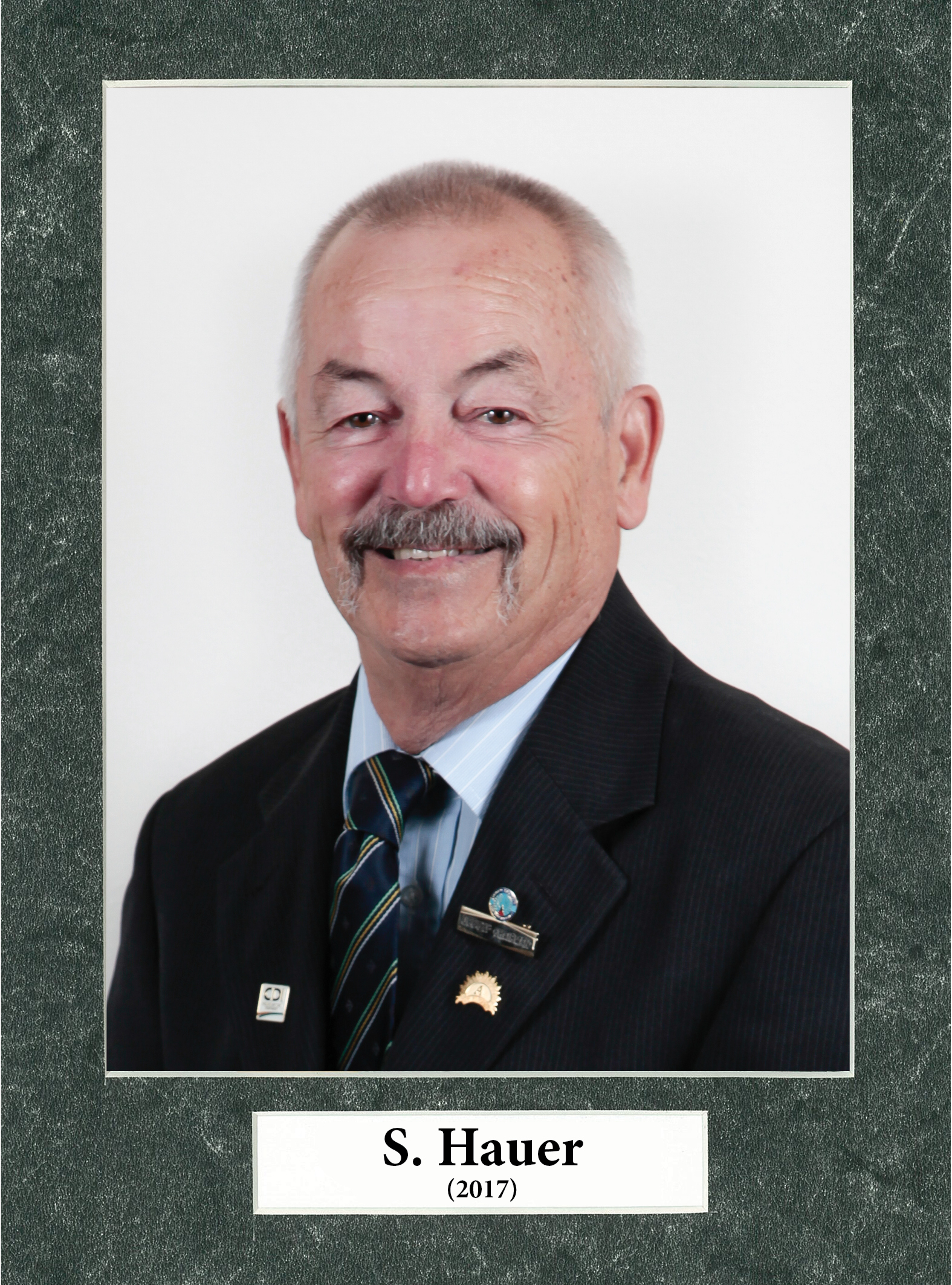 Steve has been a Director on the Board of Penrith RSL Club for 13 years, Deputy Chairman since 2009 Steve is the Chair of the Member Services & Discipline sub committees and a member of the Governance, Compensation & Nomination sub-committee Steve is active in building relationships with our intra-clubs and has been involved with the Darts Club for a number of years. Steve's professional background has a focus on OH&S and workplace compliance and as a union delegate, industrial relations. He completed his Certificate IV in Governance supporting the Boards compliance requirements. 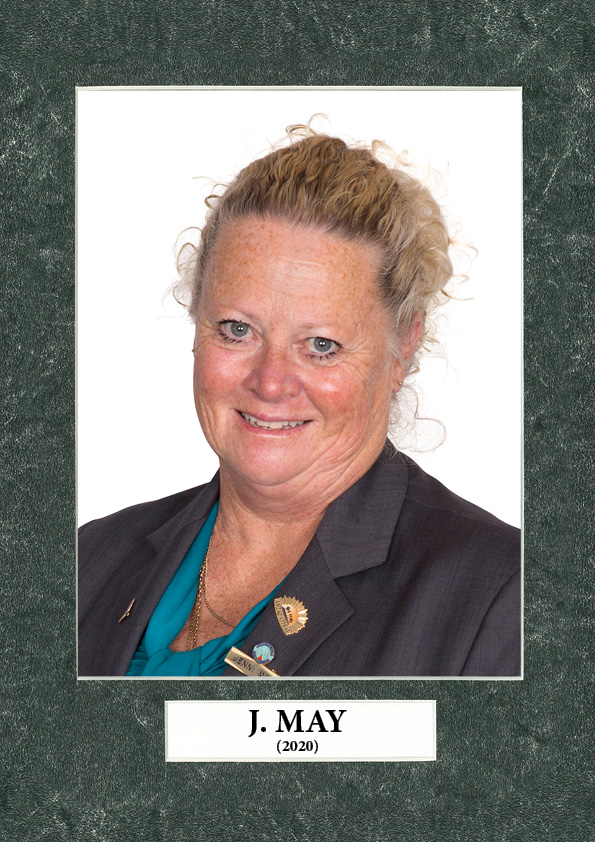 Jenni has had a long affiliation with Penrith RSL, being a Director on the Board of Penrith RSL Club since 2010. Jenni currently holds the positions of Deputy Chair of the Board, Chair of the Youth, Community & Member Service Committee and a member of the Governance & Policy, Audit & Risk and the Intra-Clubs Committee.
Jenni is passionate about the RSL; her father served in the Army in Vietnam and her son served in the Australian Army including a tour of Afghanistan.
Jenni has a strong relationship with the community being President of the Sub club Netball Club for 25 years and held positions in the Penrith District Netball Association Executive, supporting her commitment to youth and sport in the local area. She has been a committee member of various community organisations and volunteer initiatives and is a huge supporter of special functions including Penrith RSL's annual International Women's Day Breakfast.
She has vast management experience, qualifications and expertise in Human Resources, Quality, Compliance and Training. Jenni has liaised with and assisted intra-clubs navigate diverse issues and assisted establish disciplinary guide-lines, by-laws and constitutional changes and subsidy submissions. These skills have also assisted with development projects at the club. She has completed her Certificate IV in Governance supporting the Boards compliance requirements.