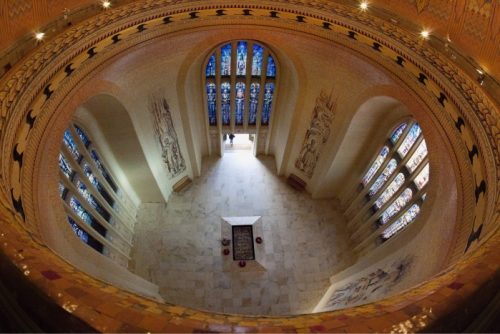 The Hall of Memory documentary film

The Australian War Memorial has released a powerful documentary paying homage to the Hall of Memory. In particular, it emphasises the 15 values observed in Australian servicemen and servicewomen which inform character.

Produced by renowned journalist, producer and film-maker Max Uechtritz and scored by songwriter and record producer Garth Porter, The Hall of Memory was made possible through a financial donation from Michael and Katherine Ribot de Bressac.

The film explores the concept and intent behind the 15 stained glass panels in the Hall of Memory, each of which symbolises one of the quintessential qualities displayed by Australians in war. The film features Memorial Director Dr Brendan Nelson presenting the story of the creation of the Hall of Memory and its stunning designs by artist Napier Waller OBE CMG.

Dr Nelson said the Hall of Memory at the heart of the Memorial reflects the vision of its founder Charles Bean, and John Treloar, a veteran of Gallipoli and France and the Memorial’s longest serving director.

“They asked themselves a very important question: ‘What are the essential personal, social and battle qualities seen in Australian servicemen and women?’ The 15 stained glass windows in the Hall of Memory powerfully typify these quintessential virtues, all of which inform character. Transcending everything else in life – rank, power, money, influence, looks and intellect – is character. Young Australians seeking values for the world they want need look no further than these,” Dr Nelson said.

We invite you to watch the The Hall of Memory film.

Tags:ANZAC, Australia War Memorial, Hall of Memory, Lest We Forget