To The Penrith RSL Board,

Brazil was absolutely amazing and we covered so much in the 17 days my team of 13 other players and I spent in the country. It took us 30 hours of flying to get to Brazil, without any stops and then a bus trip to get to our first hotel. I remember that when we arrived, we were given half an hour to get ready and then we headed off for our first training session at Clube Comary. This was the first of around 15 training sessions throughout the tour and each one was certainly first class for what we are used to here in Australia. We had to deal with 28-33 degrees each day and that was winter over there. The other change was that we always played with a ball that was smaller than what we play with here in Australia.

On top of the training sessions in Brazil, we also played a total of 8 matches against some the clubs from the areas that we travelled to, in which we won 8 of those games and we finished 2nd in our tournament, which was a massive achievement for us.

Aside from all the futsal that we played, we were also privileged to be taken to see some of the amazing sites and activities in Brazil. My team and I travelled up some of the country’s mountains, most significantly Sugarloaf Mountain, which gave us some of the most beautiful views that we’ve ever seen. We also travelled to Christ the Redeemer (Christ on the Hill), which is a lot bigger than we thought when we stood below it, we went to the many market stores Brazil offers, both day and night and so the huge differences in the way they trade compared to Australia. We were also able to see 2 top level futsal matches by some of the big clubs over in Brazil, in their national league and we watched a national league outdoor soccer match, which had a fantastic atmosphere and world class skills from the players. On our final stop in Rio de Janeiro, we made our way to Cococabana Beach and played beach soccer with the locals, we were in awe of the skills they had on the uneven surface.

At the end of the tour, the coaches compiled their thoughts and I was voted player of the tour out of all 14 boys, and presented a medal. I’m extremely proud of this as it’s a massive achievement for me.

Our adventure didn’t stop when coming back to Australia, we stopped over in Los Angeles and went to Santa Monica Pier and took some great photos of the beautiful beach there.

Since that time, I’ve been back in Australia and back into school, futsal and my final season in junior cricket. Just last week I played another national futsal tournament down in Ballarat for NSW. I was extremely proud of our effort as a team, making it to the final but unfortunately missing out on the trophy in the end, but still a wonderful effort. From that tournament I was voted “All Star Keeper” or best goalkeeper of the tournament out of the 10 teams and I’ve been selected for another Australian team which travels over to Greece in May next year.

I thank you each one of you for your support and for all that you’ve done for me. 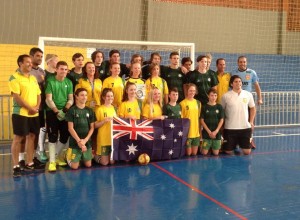 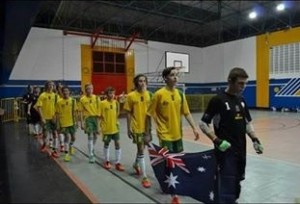